Is there anything that couldn’t be deep fried and do people really like those fatty things. I asked that in my personal Facebook. My midwestern friends told me their favorites. Deep fried pickles and even Oreo cookies.

During last couple days we have had couple weird things in university’s dining hall. They had Mac&Cheese pizza again (photos can be found in my previous Weird American Foods post, click here). This time I tasted it. It’s actually pretty nice tasting. It was like first pizza here that wasn’t too salty. It tastes well, like cheddar, macaroni and bread. It’s actually quite close to cheese sandwich but it’s not as salty and it has macaroni on it. I definitely have to do this in Finland to shock my friends and relatives haha. 😀

Another American classic that’s pretty weird for me is corn dogs. We had them in university’s dining hall last week. The basic idea is that you have sausage covered with corn dough on a stick. And the whole thing is of course deep fried. I saw plenty of these in Noah’s Ark Waterpark where I worked last summer but I never tried (I didn’t want to pay for them because they sound pretty disgusting to me). I’m happy I didn’t. Salty, fatty. Tastes like sausage, feels like oily crispy bread. Something that midwestern people love I guess? I would rather take rye bread with smoked salmon and vegetables. Haha. I think American people think my foods are at least as weird as their foods are to me. 😀 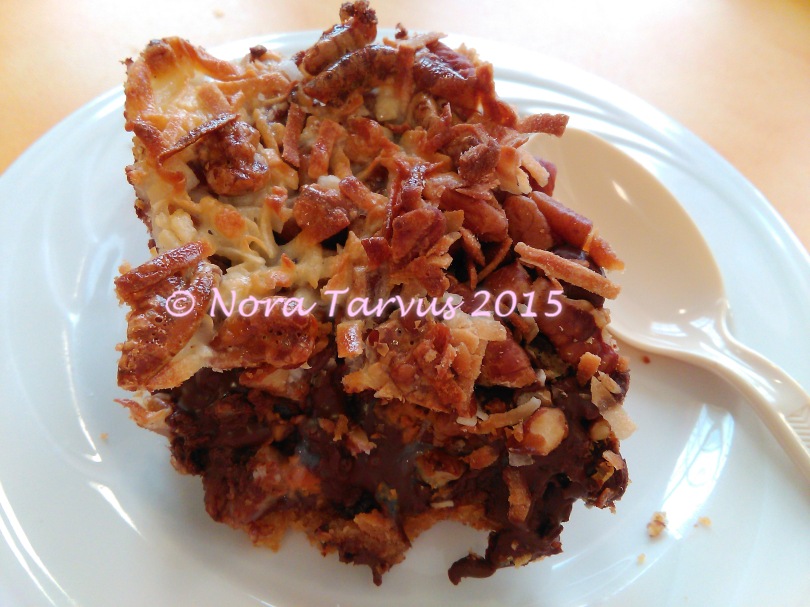 One more weird thing comes from dessert category. I actually don’t know what is this. There is at least huuuge amount of chocolate, some nuts, some oats, some candy pieces, some caramel sauce, maybe coconut and something else in it. Haha. Quite often we have cereal cake kind of things – and no Finns, not salty crispy healthy rice cakes but sweet, sugary, American cereal cakes. I have to post photos in some point to show you guys!

What’s weirdest thing you have eaten? Where was it?