My bachelorette party was a weekend full of fun with some awesome friends. My made of honor and my friends had done amazing job with the planning and the weekend turned out to be great. If you’re looking ideas or inspiration for bachelorette parties, you should definitely check this post out!

My bachelorette party started around 7 or 8am with my fiancée’s brother waking me up with some random music. He told that it’s the bachelorette party today and then four of my friends came into our home telling that I’ve got one minute for packing my stuff and getting white jeans and a cute shirt made by them on.

I thought I was going to have that nice style for the whole day but I was so wrong! There always have to be some pranks and random outfits in bachelor and bachelorette parties (at least here in Finland that’s so) so I was asked to wear a light pink pathologist / dentist outfit. 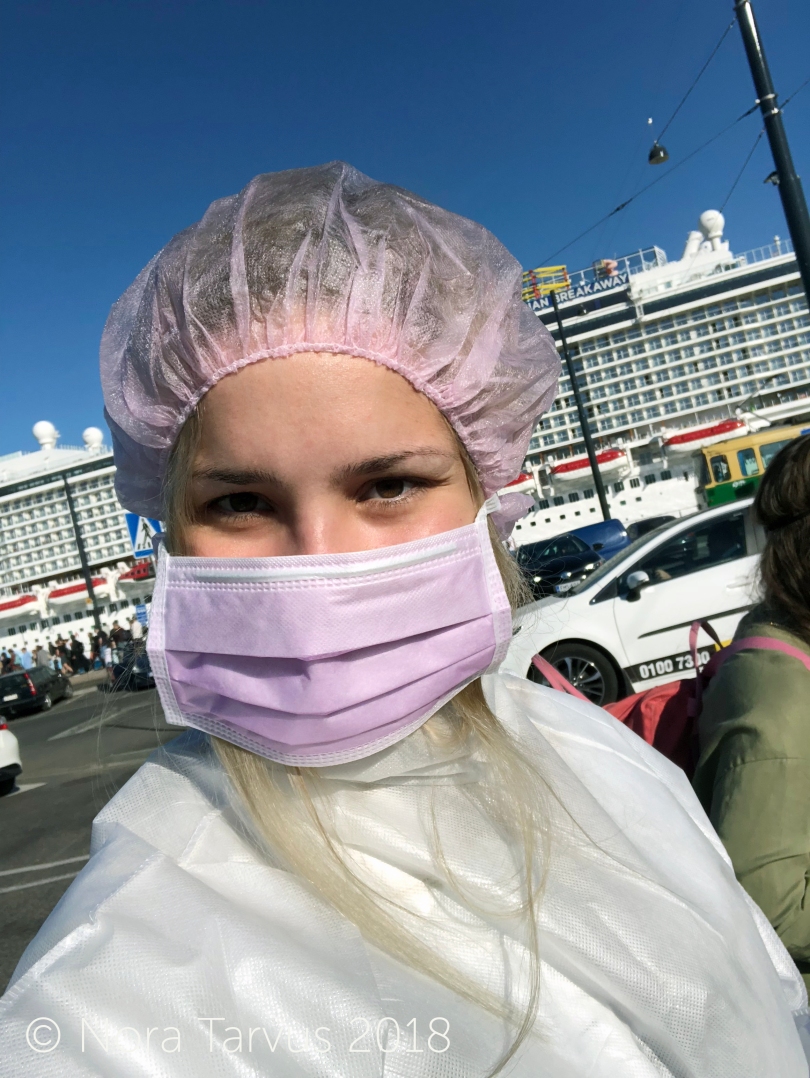 After getting that outfit on we rushed to a car – which was not so luxurious 20 years old Ford with a broken AC. Everyone probably knows that I usually don’t step into any car older than five years so that was a bit shocking. My fiancée brother was driving.

When the car stopped we where in the marina of Helsinki and I was finally allowed to take that pink pathologist look off – it was a super hot day in Helsinki and everyone who has ever worn those probably knows how hot there is inside so I was quite relieved.

However, because it was a bachelorette party there was no hope of wearing anything normal. Instead I had my white jeans and that nice suit tuned to the theme with an US flag as a cape, pink stetson and some first of May decorations. I got quite many people looking at me weirdly haha!

When we were in the Marina there was me and five of my friends. However, three more and the made of honor missing, she told she thought the boat was leaving later, oops. She promised to take the next boat to Tallinn.

Cruise from Helsinki to Tallinn 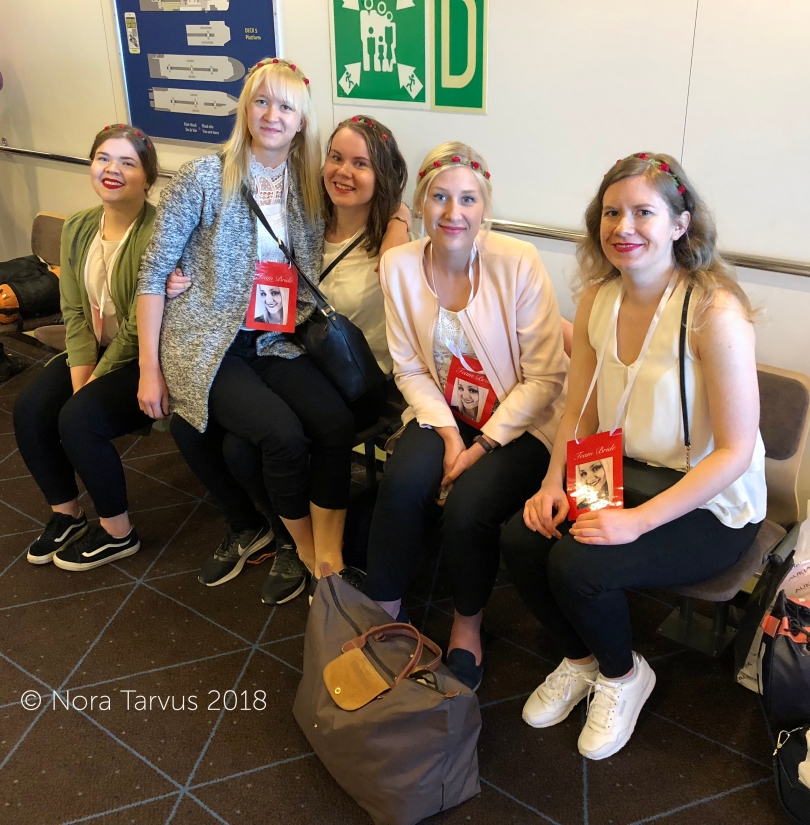 Above: in the boat

So, there was just six of us in the boat and four missing. I was a bit sad but I didn’t let that bother me. I know that my friends are all super busy women so probably they all got something else important?

The boat ride took around two hours and during that I had two tasks to do. The first one was to create a healthy morning starter shot with a blender. My friends had brought a blender, apple pieces in a water (which looked more like kale in a beer but anyway), lemon and fresh ginger pieces. Irrespective of the weird looking ingredients I actually happened to create quite delicious shots for us and we actually drank those. 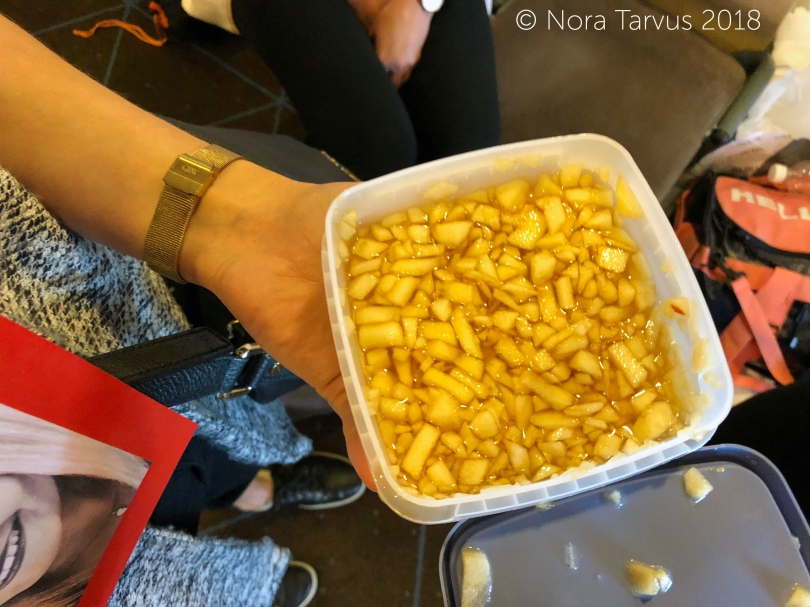 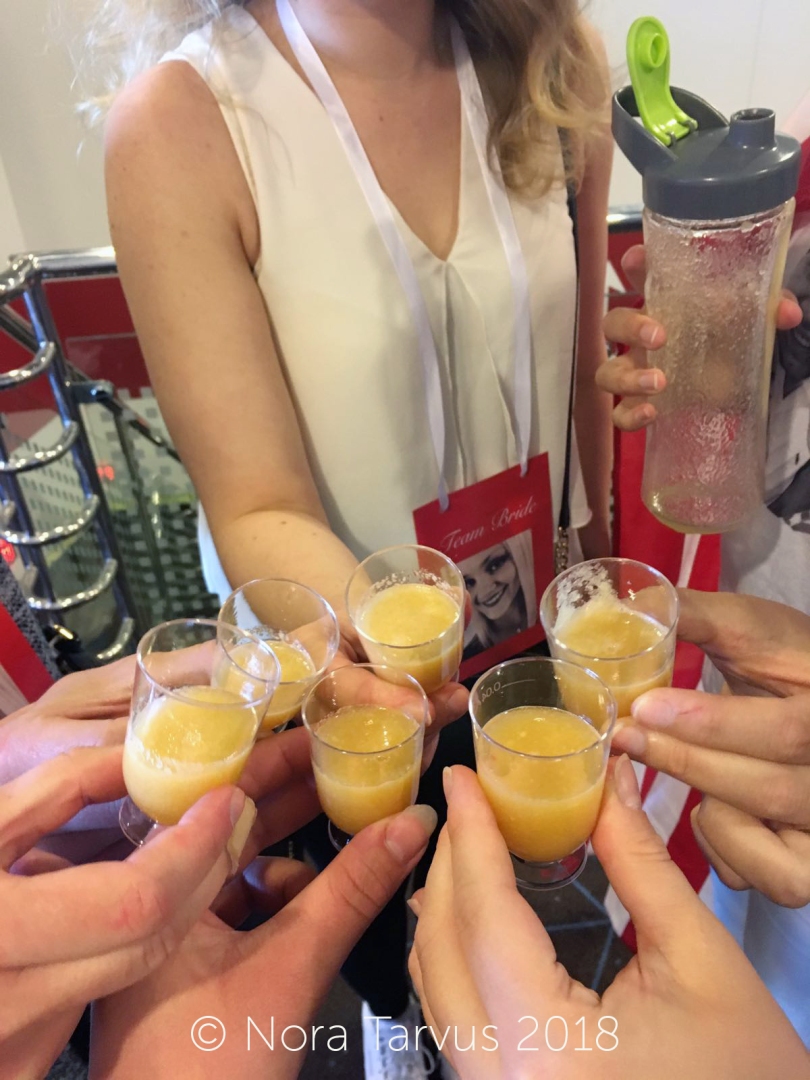 Above: Wellness shots turned out well irrespective of how those apple pieces looked

Another task was a paper which included a lot of different photography tasks. By doing those I could get points with which I would get a prize from the maid of honor. The tasks included easy ones like a group photo, photo in a boat and artistic photo from Tallinn. Additionally, there was some crazy ones that would offer extra points – like touching random persons mustache or taking photo of someone dancing on a table. I didn’t have to all fortunately.

Above: My photography tasks with scores

The First Hours in Tallinn

During our way to Tallinn two of my friends had bought some wine from taxfree. When we arrived Tallinn we had a little wine picnic while waiting for the maid of honor to arrive.

However, before she arrived my friends put a blind on my eyes we started walking somewhere. The walk was something like 30-40 minutes because we got a bit lost. Finally we went to an AirBnb located in trendy Kalamaja district. I still had a blind (US flag) on my eyes.

Above: Our AirBnb and the missing girls before we arrived

When my friends took the blind of everyone was there with amazing decorations, sparkling and food! And actually, the bride of honor and those missing three others had been there a lot before us to organize everything. How sweet is that?

Dancing and Getting Back to Our AirBnb

Above: Just hanging out a bit

After meeting everyone we hanged out and ate a bit – and had some champagne with cotton candies, how cute! My friends had decorated the place and the food with girly colors and some America theme things like little flags. That was perfectly my kind of party! 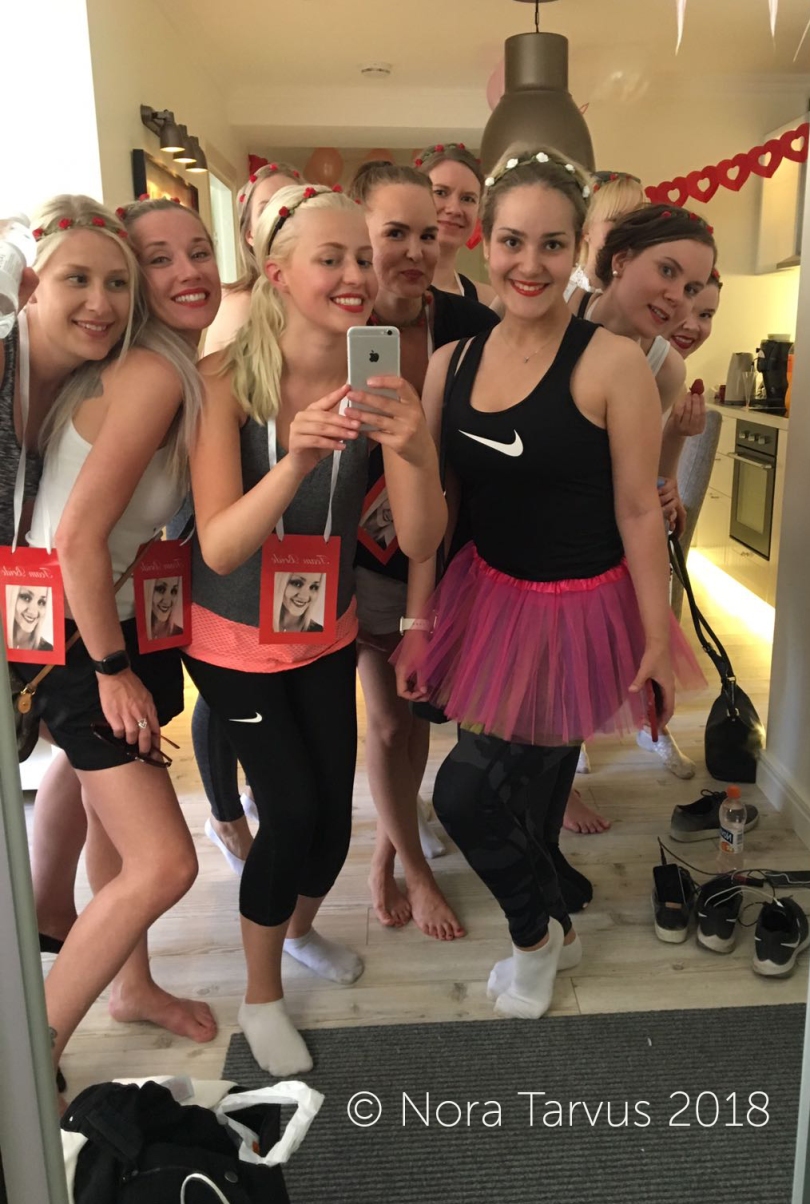 Above: Ready to dance!

Well, we were actually supposed to have a salsa class but we happened to do own impro with and without pole since the instructor never showed up. I used to pole for years but haven’t even touched a pole in last three years but it happened to be super fun once again. Oh, how I miss all the pole classes and dancing in general – I wish I’d have more time for dancing after wedding! 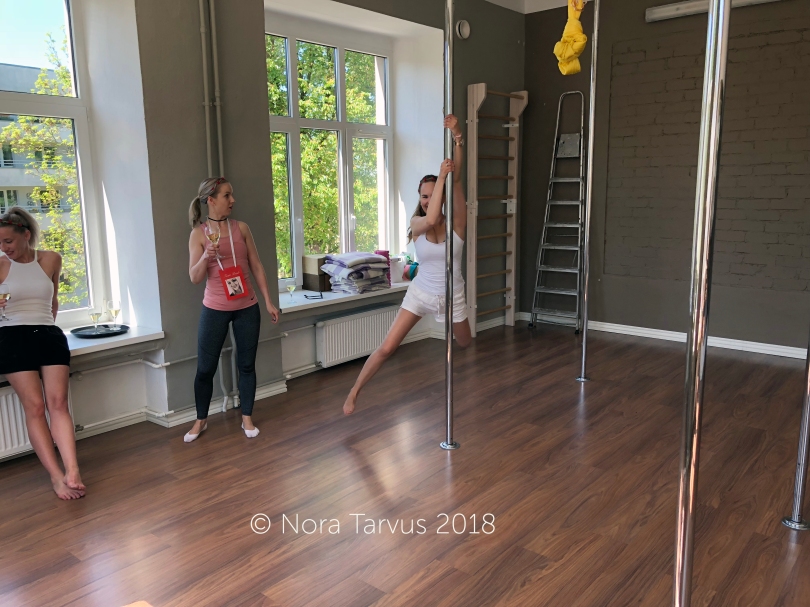 Above: My friend is a natural talent – she had never poled before

Above: playing with the pole spontaneously after 3-year-break. Ps. allow HD from bottom right corner to make the video work.

After the class we walked back to our AirBnb and took showers, did our makeups, and ate some more food. From there we carried our way with couple of Ubers which was quite an experience in Tallinn since the driving culture in there is quite crazy. 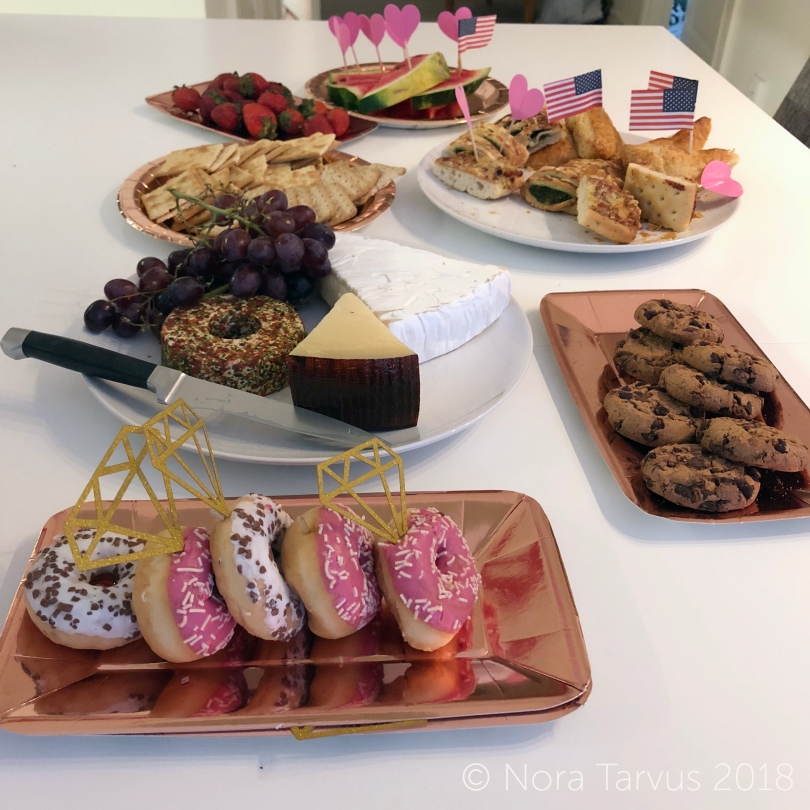 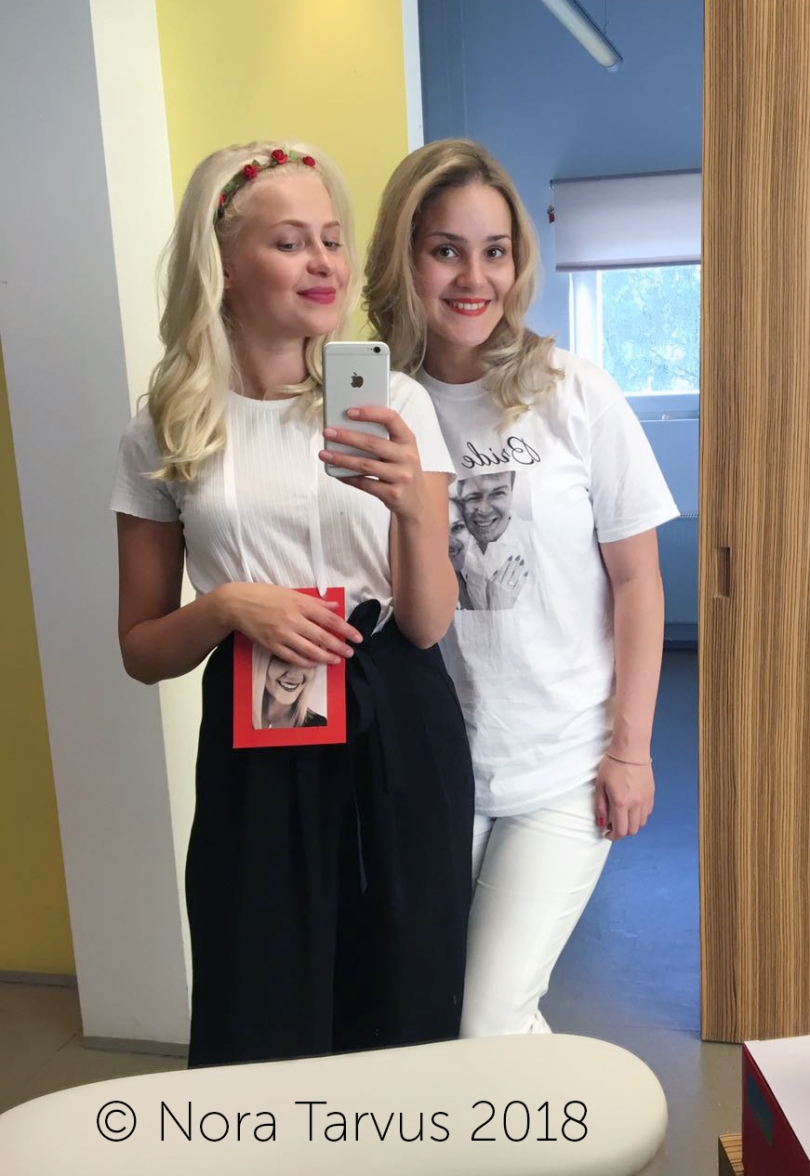 Above: Me and the maid of honor with our lovely curls

After eating we went to a Vanilla Sky Beauty Salon where some of us had blow drys and manicures. I had both which meant that I got to have beautiful curly hair and classy red nails for the rest of the night which was great since I had no time to do my hair, nails or even makeup during the morning. 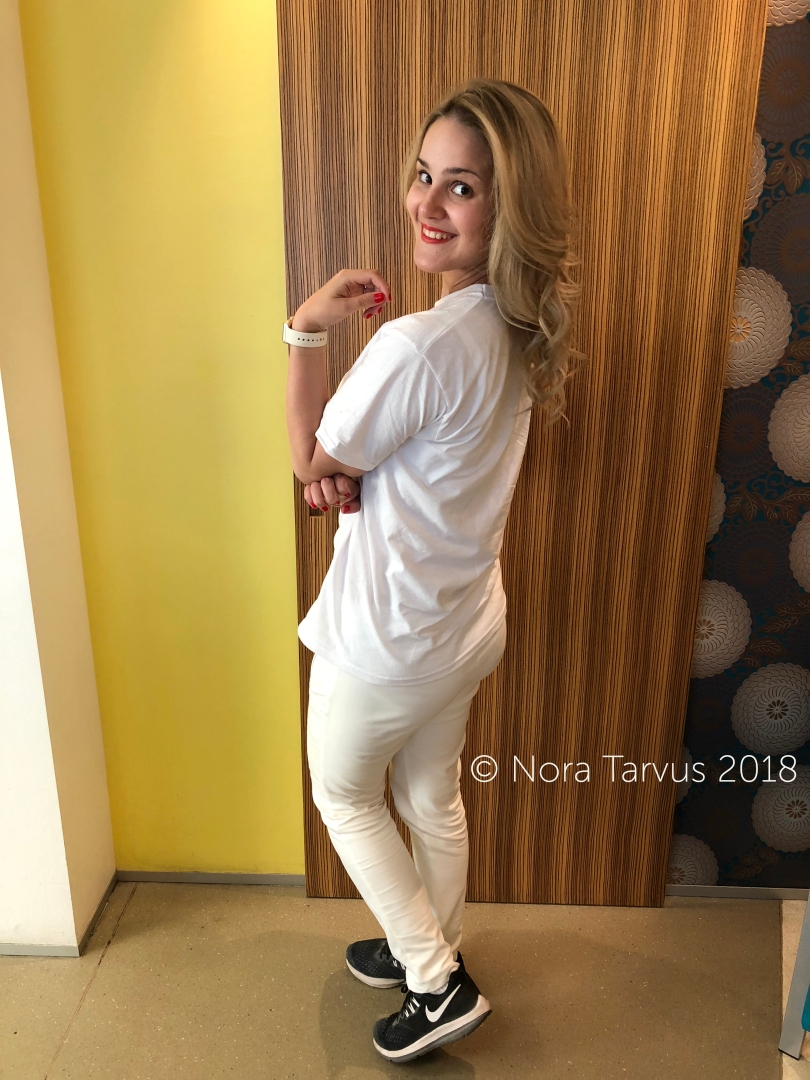 Above: I wish I’d have time to do my hair like this every week! Wondering why blow-dry hairdo’s aren’t popular in Finland?

Wine Tasting, Photo Booth and Getting Ready for the Dinner 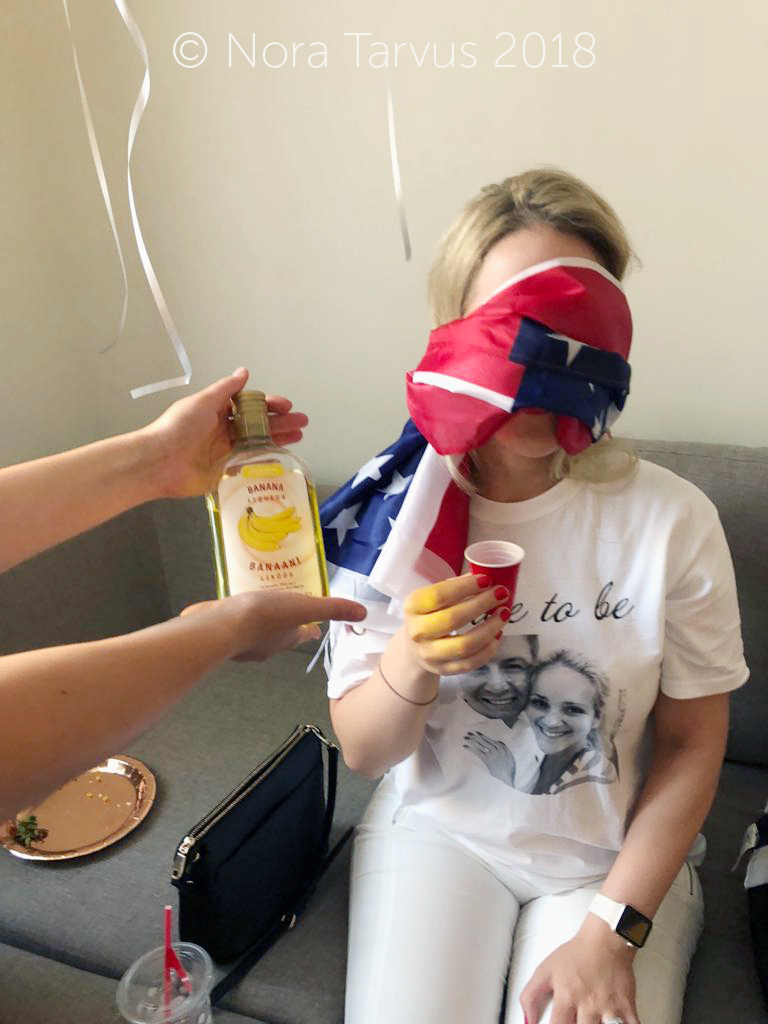 Above: For some reason I did not recognize this wine haha!

We went back to our AirBnb again and had a little wine tasting with friends – it was a blind tasting where they made me guess different wines they had bought. I was supposed to tell them description, grape type and country. I got 1 perfectly correct, and 2 partly correct – and the last one was a scam aka banana liquor, suddenly I didn’t recognize any grape from there haha!

After that we changed our clothes and fixed our makeup. I had a white dress, beige heels and a pink ribbon that says Bride to Be. The look was otherwise great but my fiancée had packed me the most uncomfortable heels I have.

When everyone had nice clothes and makeups we took some cute photos with some photo booth frames, balloons and other decorations my friends had done / ordered. 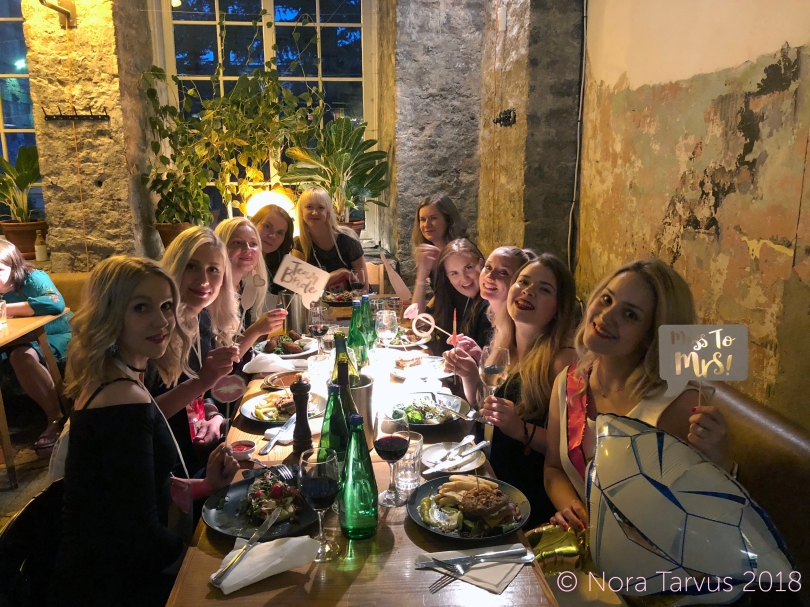 After the photo booth we took another set of Ubers and went to a restaurant called F-Hoone located in downtown Tallinn. The restaurant had nice bohemian rustic decorations and seemed to be quite trendy place with good service.

We ordered some brochettes and dumplings for starters. After that we ordered some wine bottles for sharing and the main courses. I had a rye bread burger with some fries. It was okay but I’d probably try something different next time.

Above: Girls ready to party!

From the F-Hoone we were supposed to carry on to a club called Va Bank. We had VIP passes to there. However, I had to go changing shoes – thanks hun for packing my mostly uncomfy shoes – so I spent the rest of the night in my Nikes lol.

But well, I think in a bachelor party you can wear anything an any shoes without being weird since nobody knows if I chose those myself haha. We were VIP partying in Va Bank until like 3-4am – or some of us left earlier and some later but anyway. From there we took an Uber back to our AirBnb and sleeping for couple of hours

The Sunday morning included basically just waking up, packing stuff and heading to the marina of Tallinn. I was feeling quite well since I drank a lot of water on Saturday night. Some of my friends weren’t as well but everyone was able to walk to marina and boat back tired but happy without getting seasick or anything like that. Because of doing the photography tasks on Saturday I achieved a little price including a morning survival kit, how sweet is that! 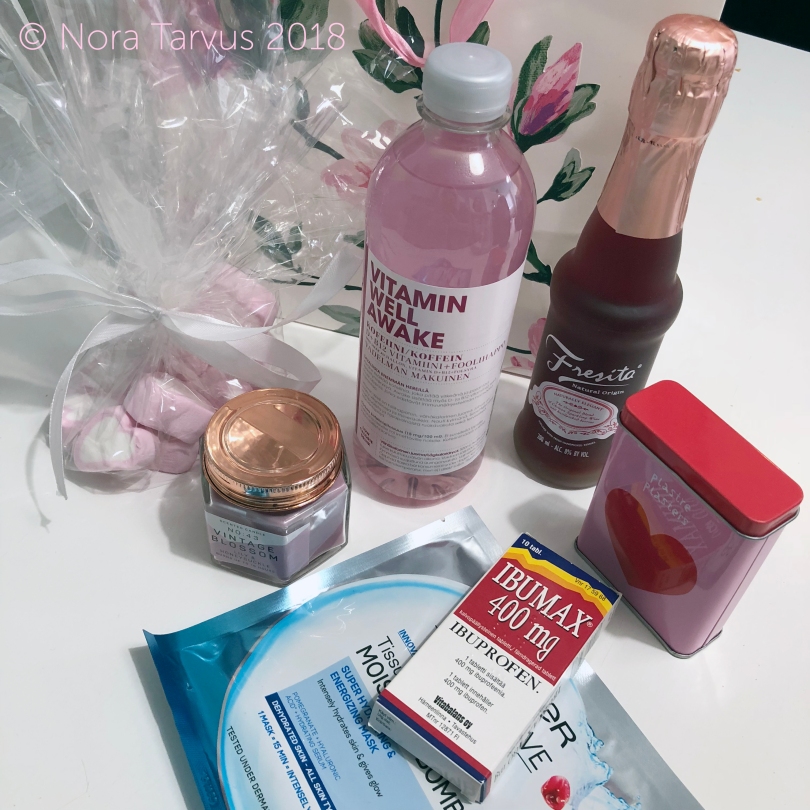 We were back in Helsinki around 2pm on the Sunday afternoon. From there my fiancée picked me up and we went to the World Village Festival to have some international foods and then just chilled.

This weekend was a great one for the bachelorette party. It was great to have nine amazing women sharing it with me. They had done excellent work with planning and they really surprised me with all the activities.

I was prepared for a rented summer cottage in Finland (haha!). So, Estonia was a lot better than I was waiting for. Also, I love how they had combined all the things I love like the US, wines and dancing to the program we had. Thank you!

If you ever have to plan a bachelorette party, think what the bride loves and use those elements while planning the day! Also, remember to take enough time for planning and enjoy the day with her.

How Was My Bachelorette Party Overall?

The first coupe hours of the morning were a light shock but not too much though. My friends scammed me so bad! After all we had a wonderful weekend filled with sunshine, fun activities and good laughs together.

I wouldn’t change a thing and I feel very honored and happy that I have so wonderful women as my friends. It was great to see how much effort they had put on the weekend and I’m sure they had some fun during it too. I hope they all also enjoy the upcoming wedding. 🙂

What kind of bachelorette party would you enjoy the most? Or have you had or organized one? If yes, what happened during the day(s)?