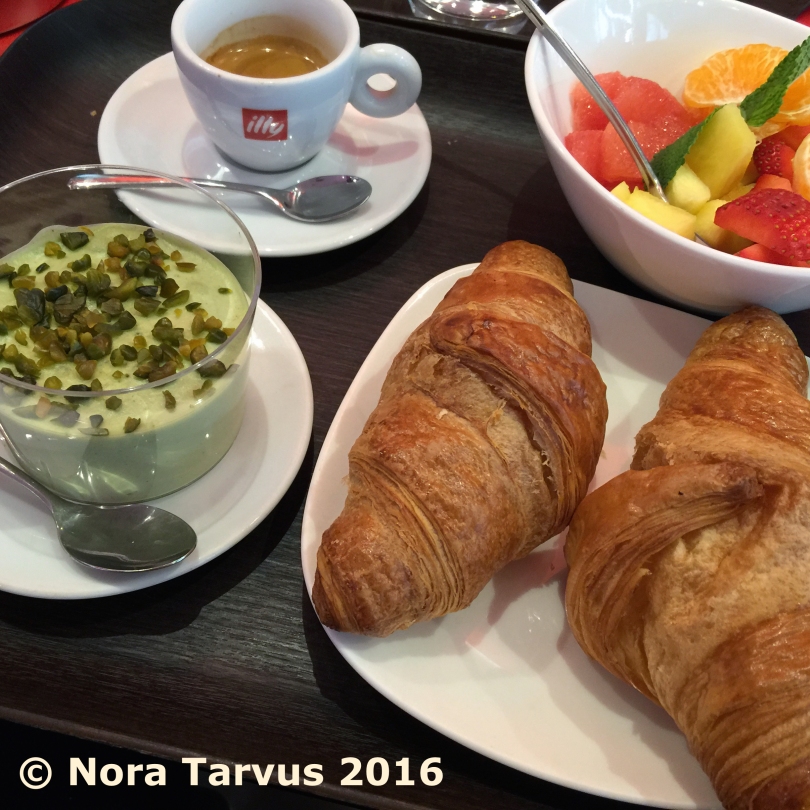 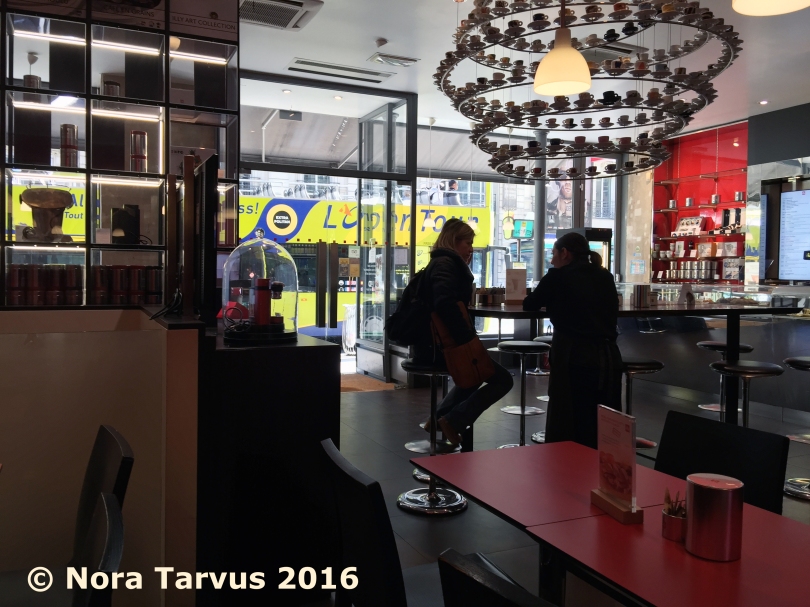 Breakfast in Espressamente Illy (photos above). This Place had really great reviews on Tripadvisor but wasn’t too great. Their breakfast options were mostly sweet things and bakings. Good tasting but nothing that I would eat more than once a week.

Signing out from the hotel was easy and the service was great with Marriott membership and Amex Platinum we were able to have the room for one extra hour and additionally they held our luggage for free until evening when we came to pick them up. We were also allowed to shower in the spa before leaving to the airport. Moreover the receptioner called us taxi and they also carried out luggage straight to it. How luxurious? 🙂 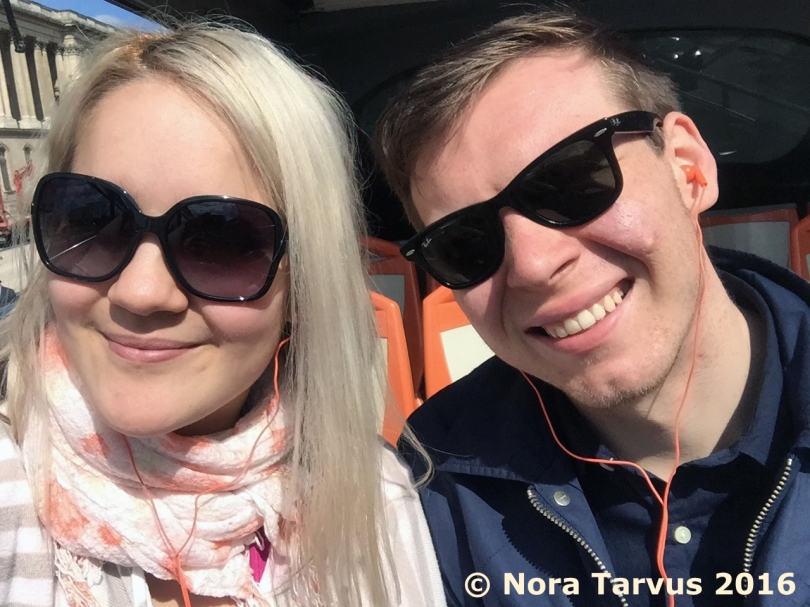 Between check out and leaving to the airport we had couple hours in Paris. So we took a bus tour from company called Foxity. It wasn’t too good but at least we were smart and bought some baguettes and macarons to eat on board. 😀 The bus went by many interesting places but their recording was quite hard to hear and it wasn’t very clear about what building we are talking (it said f.ex. the building on your right when on our right was Seine river). It was however nice way to see a lot in just 2 hours and it was less than 20€ per person so I guess we shouldn’t have wished anything earthshaking. 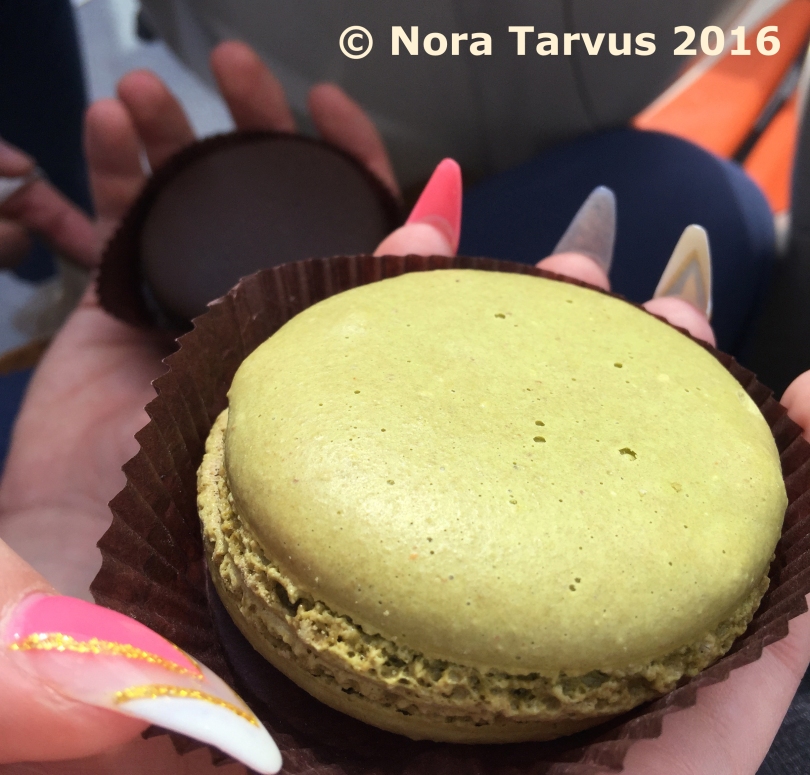 Ps. We bought our bus snack from Monoprix that had everything from cosmetics and clothes to groceries and own bakery. They have really valuable prices and excellent bakings there. For example around feet long (30cm) baguettes filled with combination of veggies, cheese, ham, etc. were only 4.5€ (!!) in Subway same combo would cost double that much and they not even as good. The baguettes in Monoprix are French style so they are a bit different what comes to fillings but you should definitely try them because they are delicious! We also bought some huge macarons (photo above) from same Monoprix for 1.8€ each. In breakfast cafés small ones can easily cost 4-8€ per 3 pieces. The macarons were good but not outstanding. My favorite one was their chocolate one. Yummy! 🙂 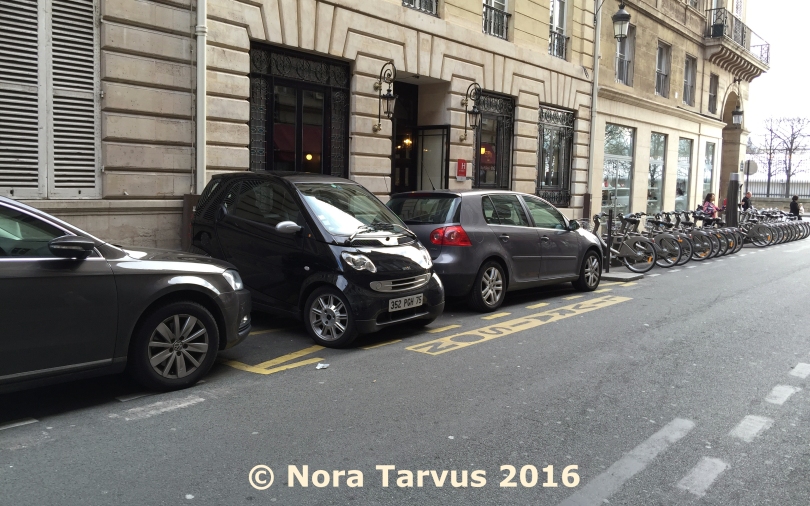 Btw when we left hotel we saw a car parked like this. Would anyone in Europe or US never do this? I guess no, haha. Different kind of freedom can be seen in traffic culture in Southern Europe. They don’t respect the lines and I guess parking like this is just fine.

After tour we took taxi from our hotel to Orly Airport, it was 39€. From Charles de Gaulle (airport to which we arrived) it was 50€ so Orly is a bit cheaper. However I wouldn’t go there again because…

Orly south no automatic check in, waiting (without Wi-Fi!) in Starbucks for an hour (you’re allowed to check in on a desk two hours before departure). It took another hour to get trough all the security and passport check…

In addition the only lounge was in terminal A (and even thought A was printed to our tickets we were flying from B), and you’re not allowed to use it if you don’t have flight leaving from A (where only leaves flights to outside Europe).

Service in Orly was mostly rude and only French. That and many other things made it quite hard to navigate and we had to show our passports and boarding passes more than ten times (!!) before we were in a plane. And just to mention, we were leaving France with all those checks – there was only one when we arrived to the country via Charles de Gaulle international airport. If you can don’t choose Orly. Of course, I don’t know if the checks are the same when we leave if the airport is different but at least people where helpful and spoke (or at least tried to speak) also in English.

Finally we got into the plane almost in time and the flight went well. We even bought our best and most valuable airplane meals ever. Can you believe that a warm meal with soda or water was only 10€ (11$)? And it was great! Chicken, potato something, vegetables and some barbecue sauce. Nice end for the trip. 🙂 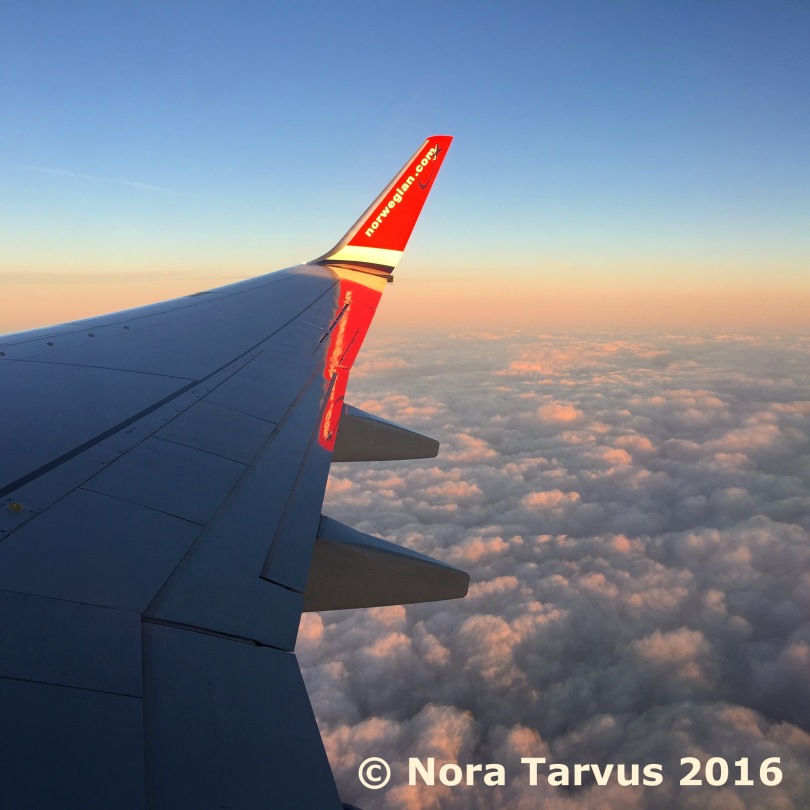