– We flew from Helsinki to Oslo with Norwegian, at the sunset time

– We took Oslo AirPort Express Train to central railway station (the AirPort had plenty of signs and staff members ready to help), the ticket cost 180NOK (about $20), runs every 10 (or at early morning 20) minutes (above is view from the train)

– View from the central railway station

– Starbucks (I thought the concept is supposed to be the same everywhere but in Oslo they had super cute cups for people drinking their coffees “here” instead of taking them with. Anyhow I’m a bit disappointed that my skinny vanilla latte wasn’t the same that it’s in the States. Maybe they misunderstood my order or something but there was no vanilla in my latte) 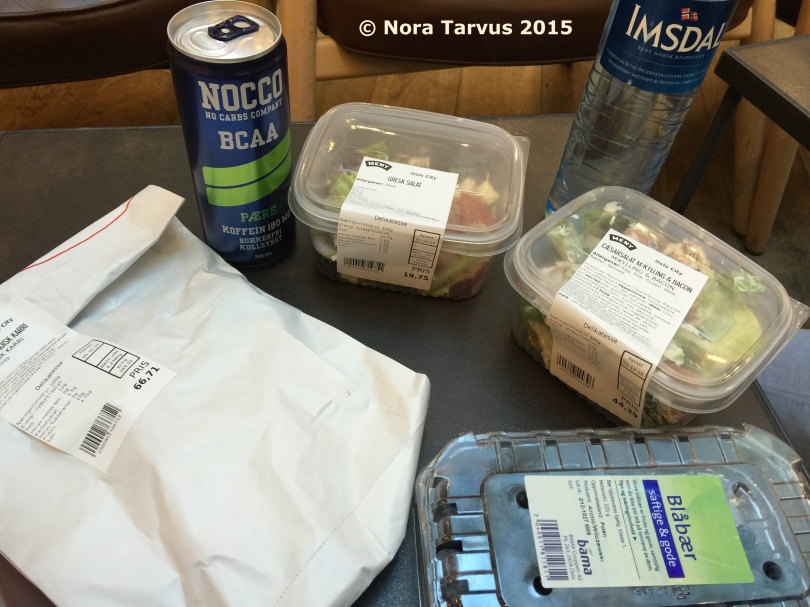 – takeaway food from Meny (local grocery store) – Caesar and creek salad, blueberries and some chicken + bcaa drink & water. Btw that bcaa drink was great, it’s an energy drink that has no sugar or carbs. It includes caffeine and bcaa (brand chained amino acids) instead – those are amino acids that only can be metabolised in muscle tissue.

– Eating in Fridays: good and really healthy salads 159NOK ($16) each as a lunch special

– Back to the airport by the train. I found it excellent that in Oslo’s airport train there is luggage space that can be seen from all the seat – you don’t have to worry if it’s still there! 🙂
– Enjoying 2 hours free wifi in Oslo airport

Thanks Oslo for great experiences! We didn’t do anything special but we had awesome time exploring the city for about 8 hours. I already look forward to my next travels to Norway next spring. 🙂