Having beautiful blonde hair have been a dream for me for too many years. In late February 2015 I decided to make it finally happen. I admit that my dark brunette hair looked really good on me but it wasn’t my dream hair, the hair I have now is. I almost cried when I saw the final result. “Is that my hair?” I asked when I saw my reflection on a mirror.

I did around 10 home bleaches, used a lot of toners, silver shampoos, masks, etc. I found it fun to make everything myself but now I would rather go to professional. All the DIY products cost me around $300 in 2.5 months and the results could have been better. It’s for example pretty hard to get equal tone if your bleaching with home products. You might also find some spots that are not bleached at all. Those both happened to me. The worst scenario would be your hair melting because of too much bleaching. I never thought that it could happen to me (and fortunately it never did!) but when I went to hairdresser he declined bleaching my hair because he said that there was a big change that the whitest area could have melted (I’m happy I went to see him instead of doing one more home bleach it wouldn’t have been nice to have 0.5 inch hair).

This is my DIY result and after a hairdresser (the tone looks a little different under various lights – the last picture of the first collage is from same day than the right one of these): 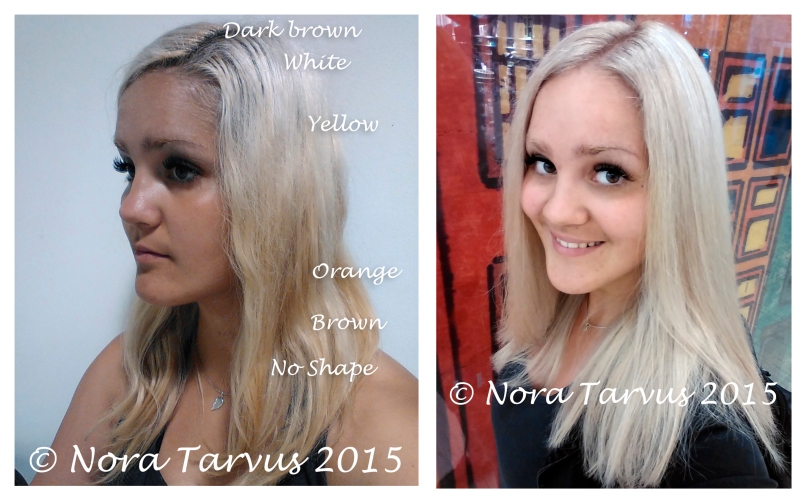 I went to New Hairstore Kamppi with hair of left picture. I was seriously thinking bleaching my dark roots and cutting a new shape to my hair. However the hairdresser, Pekka Halonen, told me that he doesn’t want my white areas to melt. It might have happened if any bleach would have touched them. We decided to use color that has a little bit of bleach in it but that also tones the hair. He put that color to my entire hair so that it would make my roots and orange areas a little lighter and on the other hand it would give some tone to my paper white areas. He is a real professional who have been working with hair for more than a decade but even he said this wasn’t the easiest case because I had really dark and white hair next to each other.

In my opinion Pekka did great job with coloring and my haircut. He might change his working place soon but he gave me his contact information so that we can carry on with my hair together. We planned doing some highlights in some point to make my hair slightly lighter. Will see, I’ll be happy with this hair for couple weeks though. 🙂

– Use hair masks, treating conditioners and oils for damaged hair

– Be patient. Instead of using super strong bleach often take your time – you will not be blonde in a day anyway

What do you think? Which one looks the best brunette or blonde (or yellow 😀 )?