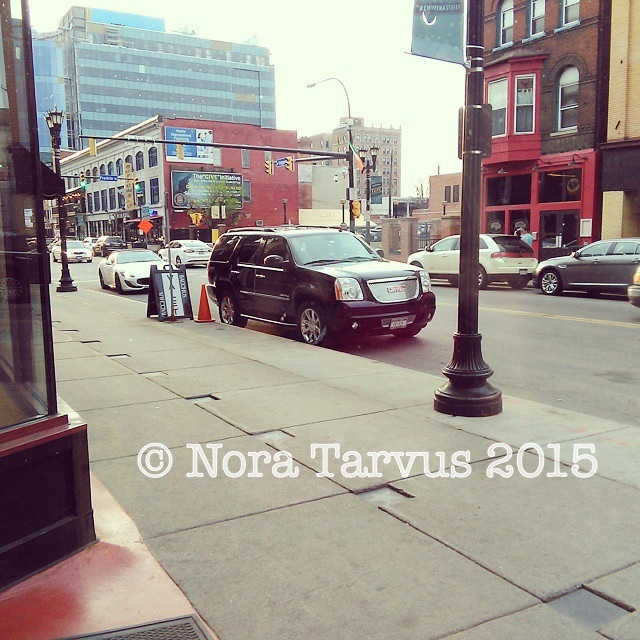 During our travel from Ada, OH to New York City, NY we had to stay nine hours in Buffalo, NY on Saturday 9th May 2015. Buffalo is located in west corner of the State of New York. The population of Buffalo is about 350,000 people. Because the city is big I usually assume that a) there are a lot of restaurants, stores, etc. open 24/7 and b) it’s easy to walk around or to use public transportation.

Buffalo really surprised me. It’s basicly a ghost town during weekends – at least the downtown area is completely dead. Even Subways (restaurant chain) were closed Saturdays and Sundays. If you’re going around with a lot of stuff there will not be anything open nearby bus station of downtown, just saying. Walking around is possible but sidewalks are not in too good condition. However that’s not a problem because the city has a train that’s free as long as it goes above the street (in some point it goes underground and you have to pay for it).

I recommend you to take that train from downtown to theater district because there is a lot of people, nice little restaurants, cafés, theaters and other activities. If you have to change bus like us staying in one place that’s open long hours might be a good idea. On the other hand if you have less stuff exploring theater district would definitely have been lots of fun. Maybe next time? When you come to Main Street (where the train operates), you should take the train to right to get into theater district. In opposite direction everything was closed on Saturday. Weekdays other areas of the city should be fine and alive too.

We ended up staying in fast food restaurant called “Mighty Taco”, that’s one of the first restaurants in theater district. It’s located two blocks from Main St. Mighty Taco is open 10am to 5am on Saturdays so in our case (our first bus came around 6pm and second left around 3am) this was great place to stay. As pretty much all fast food places the food was cheap and not too healthy. We tried couple things during night. I recommend you to take either mighty burrito with meat or mighty taco with beef and guacamole (don’t choose chicken options! They use super fatty minced chicken; meat versions were a lot better). Both tacos and burritos were like $2. Large soda was $2 too. I was little sad that they didn’t have Wi-Fi but at least there was food, plenty of space and free restrooms for customers. They also have really nice interior decoration in the area where you can only sit if you buy something. We felt comfortable and safe. Further they had really nice hangout music during evening. This place was nice until around 11pm when people from bars started to make it loud and not too nice to stay. However there was security guy all the time after 9pm so it’s definitely safe place.

After staying in Mighty Taco for like seven hours we walked back to downtown and to the bus station. 2am Buffalo was pretty empty after you walked couple blocks from theater district. There were some homeless but the area did not seem too dangerous to walk there with a friend. Of course, you can never be too safe but we found walking fine.

Ps. I wrote text above before realizing that the bus station is 24/7 and they had nice café, wending machines, bathrooms and nice seats. The bus came 30 minutes in prior it’s departure time. With huge amount of stuff I would stay in the station next time. And no, it didn’t seem dangerous, especially because there was stuff working in that café. 🙂