Couple days ago I joined to TripAdvisor and they asked me to write reviews about places I’ve visited. One of them was Broadway. Broadway, isn’t it just a street? I thought. But actually when I started to write about it I realized that it’s actually tourist attraction itself. Thus I decided to write a little longer review here, in my Blog, about that street that crosses Manhattan area. I explored Broadway from 63th St to it’s end in southern Manhattan.

In this post I’ll introduce you couple must visit places by Broadway! List begins from Upper West Side and ends to Financial District.

Traffic Circle with hang out area and a statue in the middle. This is the southwest corner of Central Park so if you want find your way to Central Park by foot you can just walk Broadway until you find this huge traffic circle. Around the circle there are couple small shops like pharmacy and Time Warner Center, that’s skyscraper that includes offices, premium shopping possibilities and buffet restaurant and a lot more. From there you can find brands like Armani, Bose, Coach and Michael Kors. That’s not the cheapest mall but it’s not as crowded as tourist attraction shopping places like Macy’s. 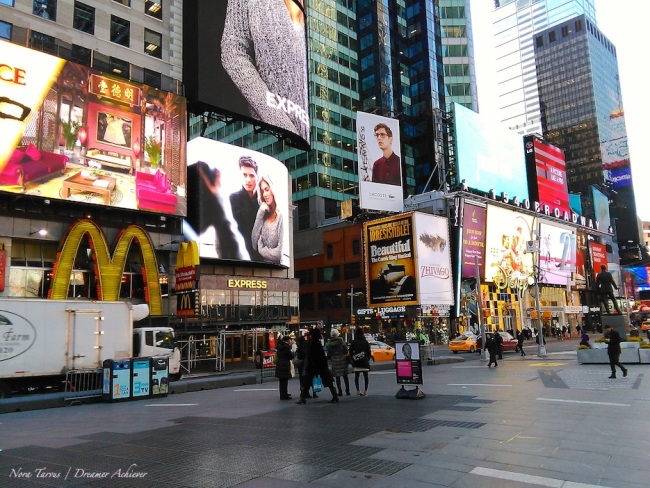 If you have never heard about Times Square you should shame on you. It’s one of the best-known tourist attractions in NYC (after Statue of Liberty and ex- Twin Towers). It’s the place where the big lights of New York are, it’s the place of huge New Years Celebration – and a must see when your in NYC. I don’t recommend you to do shopping in there but it’s quite amazing. I wasn’t able to even imagine how huge ads with lights and everything can be before going there. The Square is however loaded with huge amount of tourists so you might not want to spend too much time there. But walk trough, just to see it.

Where Broadway crosses 4th Avenue (Park Avenue) you can’t find some one place that’s not a tourist attraction but that’s really nice. It’s called Union Square Greenmarket. You can find local fresh vegetables, fruits, bread, fish and everything you can need for nice meal or just for a healthy snack. If you’re tourist without kitchen you can at least buy an apple or cookie to support local food producers. 🙂 … And if you want to do more grocery store kind of shopping there is WholeFoods in like 100 ft (35 meters) from Union Square Greenmarket.

SoHo is located between South Houston Street, Canal Street, 6th Ave and Crosby St. It’s one of the best shopping areas in NYC – there are lots of locals shopping, good prices for premium brands and nice historical architecture. Broadway crosses S Houston St so you’ll find SoHo area it easily by following Broadway to south from Midtown. I found new pants, jacket and couple nice Polo clothes (and some cheap tourist stuff) from there, you can read more about SoHo in post tagger Soho, click here 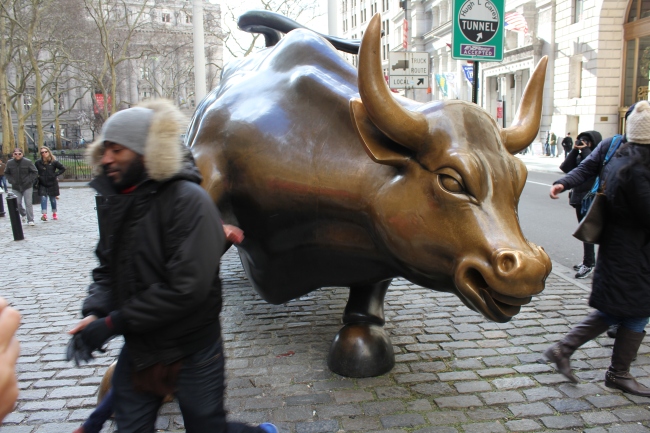 When you carry on walking all way down to the furthest south you’ll end up to financial district of Manhattan. There are City Hall, 9/11 memorial, Trinity Church, Wall St, Charging Bull and that kind of attractions nearby Broadway.

Ps. There is nice museums, parks and other things to do nearby so keep your eyes and schedule open to explore those too! 🙂