What a morning that was on flying day! I woke up like 3.58am when my dad called me. He was like “good morning honey! I’ll pick up in fifteen minutes!” Well, I jumped up, put the clothes on, take some breakfast with me and he was already waiting me outside. No make up, no food, no triple checking all papers and luggage. No morning stress, haha. 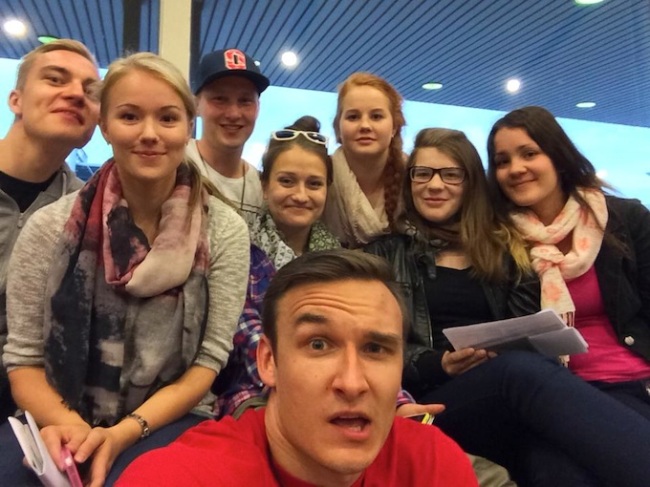 After fifteen minutes we arrived to airport where seven of my coworkers were already waiting me (and one guy who had some problems with public transport. It’s not easy get there when it’s super early morning! For example I had to options: taxi or car. In the airport everything went quite well (okay, I actually lost my passport and visa, but I was lucky that my coworker found then from a shop where we had bought some water).

Flight left just in time. It went to Airberlin’s own airport in Berlin. The airport was… well, very different than I though. We landed to terminal C and our flight to US is for terminal C. We tough that’s not a big deal and we like walk 100 meters inside the building. How wrong we were. 😀 We must walk outside (or take a taxi to terminal), it actually was like 300 meters but when you have all your luggage and there is like 25 degrees (celsius) and stairs… Anyway I think that the worst thing there was lack of introduction (not enough sights, etc).

After founding the terminal we went trough the security check. Before that we asked some personnel is there restaurants after that or only before. Before check everyone said us “yeah, of course, there is everything you need”. And as you might guess, after it they were like “no, there are no restaurants. Or hey, yes we have one here!” Well, that one was little café with muffins, bratwursts and soda. It was good to have coworker who had some protein bars and gave one to me. 🙂

Our flight from Berlin to Chicago was about 30 minutes late. That was okay but the announcement wasn’t. No-one told us what wrong with the plane and how long it would take. However the end was happy, we arrived to US only 40 minutes late and everything went fine (btw there are huuuuge amount of movies, tv-series, games, etc in Airberlin’s planes, I watched Breakfast at the Tiffany’s and Silver Lining’s Playbook).

When we arrived to US it was quite fun that the security guys asked me am I really from Finland because in their opinion my coworkers have different kind of accent than I and they though I was Estonian. Haha, close but no. 😀 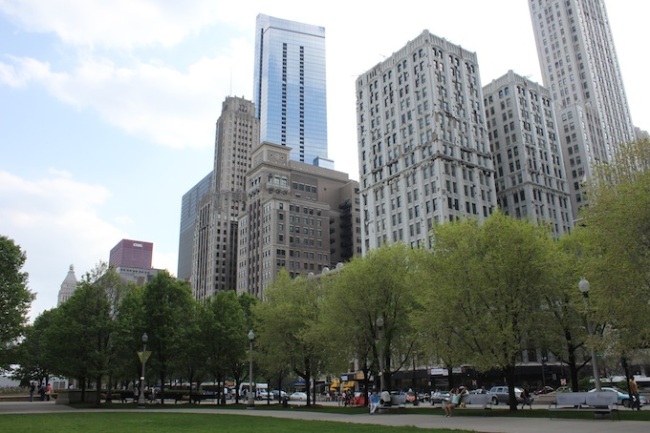 From O’Hare airport we took blueline train and went to Damen and walked to the hostel (Urban Holiday Lofts). View from the train’s window was very varying – for example I saw super cool cars like Camaros and Mustangs at the time with some slum look homes. Anyway the hostel was superb! Very clean, nice personnel, quite easy to find, tidy bathrooms, free coffee, water and tea. The price (that was like 20USD = about 15EUR) included free Wi-Fi and breakfast. We had two rooms, one for 5 and one for 8 people. Even though there was like 100 steps up to 4th floor where your room was and the room that included 2 sockets for 8 people I loved the hostel.

We dropped our stuff to your rooms and changed clothes (temperature was about 29 degrees so it was must do! Black jeans are good in plane but not in tropically hot Chicago). We continued to the centrum by train (blue + redline) and walked around it. Guys went United Center, subway and exploring American bars. 😀 The girls including me went to see the Cloud gate (“the bean”), walked near the sea, visited John Hancock Tower, ate some real American food and took a lot of photos of everything. 😀 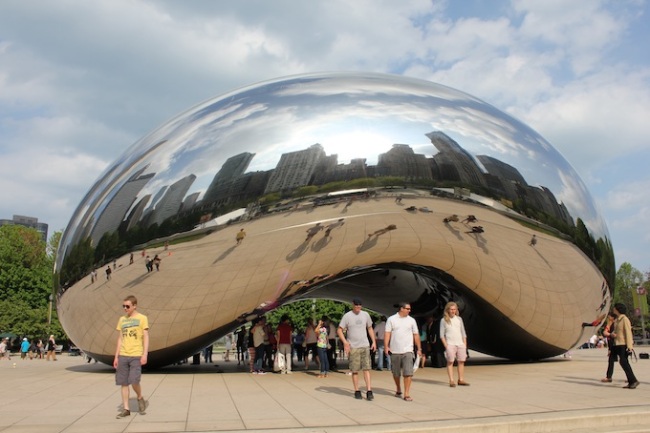 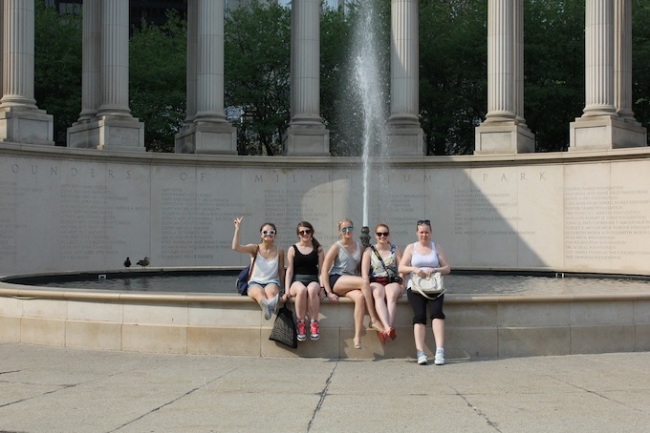 The Cloud Gate (“the bean”) is a big beanshaped sight located in Millenium Park. It’s surface is like a mirror where you can see for example yourself and supercool skyscraper landscapes. I loved it (as I already did before seeing it live because of googling. It’s a lot cooler live!) 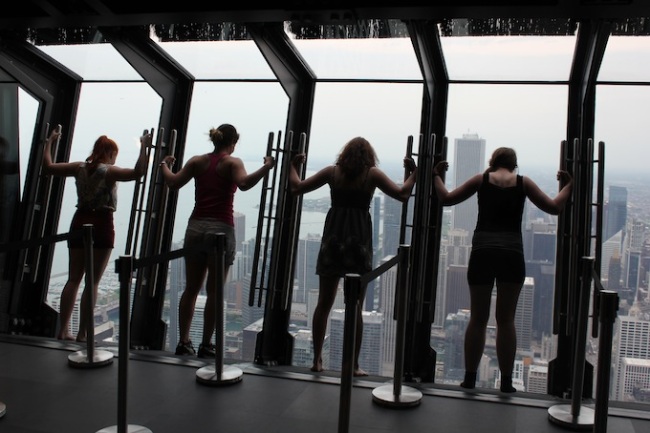 Me in observatory and me and girls in Tilt. Tilt is about exploring the feeling of dropping down from the skyscraper that’s 300 meters high. Cool and not so scary as it sounds like. It’s 5USD for a time. To observatory it’s 18USD.

John Hancock tower is over 300 meters high skyscraper with an observatory at the top. It’s cool to see Chicago from there. Moreover everything (even 100 meters high skyscrapers!) looks super small, the beaches and street are beautiful from that perspective. Yeah, they’re beautiful anyway but when you’re walking ‘em it’s like a huge labyrinth because everything is designed for cars I think.

After walking like 6 hours and being awake about 22 we went (finally!) eating. The place was called “Jake Melnick’s Corner Tab” that was a local sports bar with good quality American food like burgers, sandwiches and barbeque. Generally I eat quite healthy but I must admit that to turkey burger with fries was super after that kind of day. 😀 That was nothing like stereotypical McDonald’s like fast food. Our plates were fatty and salty yes, but also tasty with nice texture and better ingredients than McD.

With full stomaches we travelled back to hostel and just go to the bed like 9pm. 😀 But I think it’s ok, if you have been awake over 24 hours. I woke up 2am and now, about 4am I’m here, at the corridor, blogging – Coworkers are sleeping and there is thunderstorm outdoors. I think I have a little jetlag or something but still feeling good. 😀

We are going to go to Dells today after breakfast and checking Nike store nearby hostel. Next post is going to be about our housing, etc in Dells.